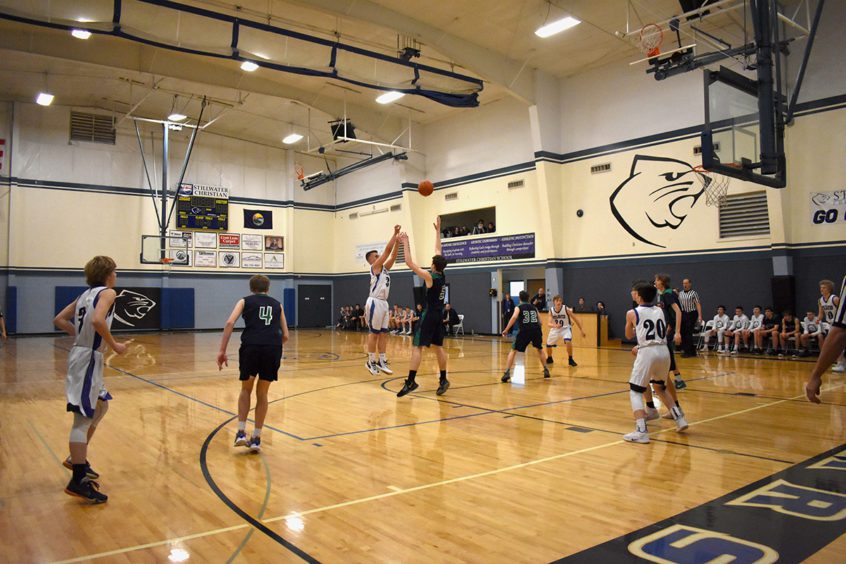 The Men’s Varsity Basketball team had been preparing for this game all season long. Entering the Semi-final matchup on Friday night at the State Tournament, Billings Christian was undefeated the entire regular season. Most viewers thought Billings Christian was going to run away with the victory; however, the Cougars held their own the entire game. Billings Christian jumped out to an early lead, and held that margin all the way to the middle of the 3rd quarter. However, Stillwater came back and took the lead to start the 4th quarter. Back and forth, foul after foul, freethrow after freethrow—Stillwater’s lead dwindled and Billings Christian went up by 3 points with 1.0 seconds left on the clock at the end of the fourth quarter. Dominic Demario, a hard-working sharp-shooter, checked into the game as Coach Harrel called his final timeout right before “THE SHOT”. Connor Drish, the leading scorer for the Cougars, took the ball out of bounds. When the ref handed him the ball, he threw a high arcing pass to Colton Johnson who tipped the ball to a sprinting Demario. Demario caught the ball in motion and heaved a gorgeous looking shot that went in. What a play from a sophomore sniper who had not checked in that entire game until the last second. Even though the Cougars went on to lose the game in overtime, it was a huge success for the program. Men’s Basketball finished the tournament by winning the 3rd place trophy.