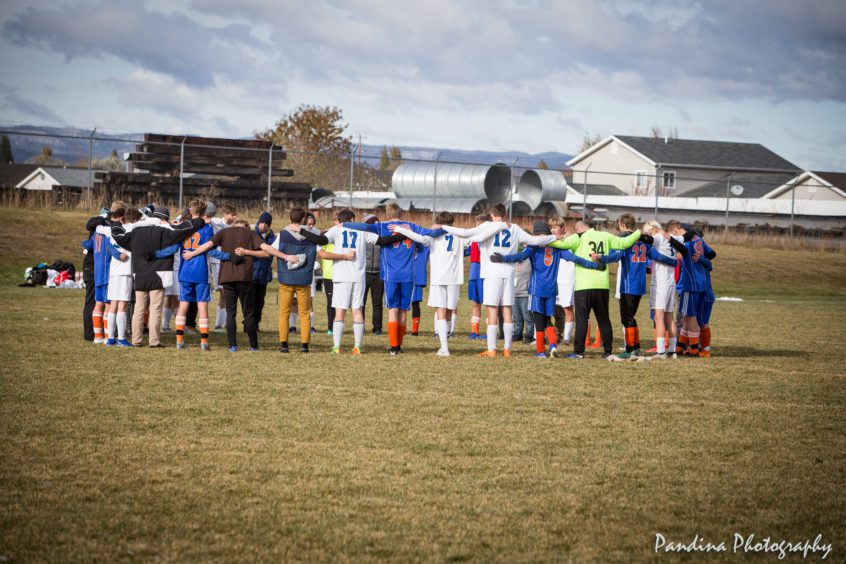 Failures marked the beginning of the men’s 2019 soccer season.  We failed to play consistently.  We failed to win winnable games.  We failed to compete the way that Stillwater teams normally compete.  By mid-season, coaches and players were discouraged.  A dramatic turn-around began on our annual trip to Cranbrook, BC.  Like a toddler learning to walk, the transition was painful to behold.  Yet, positive progress became evident.  Players began getting comfortable in a new formation.  Over the course of three games, our toddling-toddler of a team began to run.  Confidence soared when we beat a strong team from Nelson, BC in a nail-biting shootout.  Progress continued through a great weekend of games in Spokane and into the state tournament.  The marquee matchup in our state tournament pitted us against perennial MCAA rivals, the Heritage Christian Falcons.  An incredibly hard-fought match in howling winds resulted in a 0 – 0 score at the end of overtime.  Our goalkeeper, Josh Venman, saved an unbelievable 5 of 8 penalty kicks to lead us to a shootout victory.  On a snowy Saturday morning, we won a state championship with senior Colton Johnson scoring three goals and our defense preventing an excellent Helena Christian offense from scoring any goals.  The season will be remembered fondly by those who participated in it.  Understanding the importance and blessings of failures is something I hope the team carries forward with them for years to come.
– by Head Coach, Ryan O’Rourke